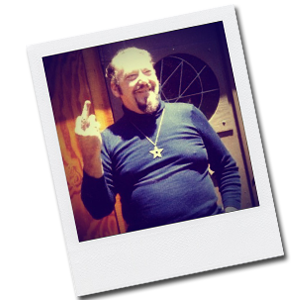 Our irreverent founder, George Patterson, circa 1983. Photo by Rowan Oakmist.

Welcome to the official home of Georgian Wicca on the web

We hope that you will explore our site and learn more about our Wiccan tradition. Thank you for visiting and enjoy your stay.

About the image: We hope you will not be offended by this image of Pat and that instead it communicates his humor and that of the Georgian community in general.

Georgia Reavis (other last names include Graham and Jacobsen) crossed the veil in the early hours of Tuesday, January 26, 2021.

Georgia was the founder and elder of the Midwest Georgian Wicca line, sometimes referred to as the Ravenfeathers line, and her Initiates live all across the U.S. She was the first licensed Wiccan minister in Oklahoma and a past member of Covenant of the Goddess.

In the early 1970s, Georgia responded to a personal ad in a Bakersfield, California newspaper from George (Pat) Patterson offering a free copy of “The Truth About Witchcraft” and a contact number. She was initiated into the Georgian Wicca tradition on September 23, 1975, and became an elder on November 13, 1978.

While living in Norman, Oklahoma, Georgia owned several small shops. The first, The Four Winds, was the only open Pagan center in Oklahoma at that time. It closed in 1984. In 1995, she opened Raven Feathers.

Initiates and close friends remember Georgia as patient, honest, and no-nonsense. They recognize her as instrumental in finding their spiritual path, and as a bedrock of their spiritual practice.

What is remembered lives.

Theme by Anders Noren — Up ↑